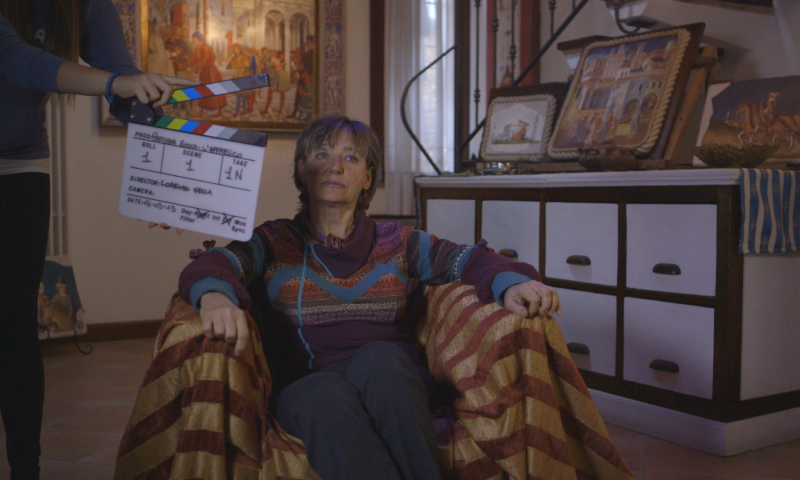 Years of study and work with the fresco technique are exceptionally represented in the documentary "Patrizia Gioia: The ancient art of Buon Fresco" co-produced with the director and film maker Lorenzo Vella, in which the author has tried to condense the atmosphere, the feelings and the passion that this fascinating technique raises  in the minds of those who practice it and those who admire it, in order to disclose this ancient pictorial form now taught and practiced by few.
The technique of fresco painting is made with simple, natural materials and has remained unchanged over the centuries. The documentary which is actually a real film product, combines together past and present through the images of the realization of a fresco on a stone wall showing the phases of the entire production set in the second half of the fourteenth century and then through the images of a fresco workshop today.

The documentary  is structured into two films of 15 minutes, the first shows in an unusual and absorbing way  the "buon fresco" technique while a narrator explains the stages of processing.
The second is an interview in which the artist tells her study experience of  fresco technique, in her laboratory, with the pictures of the frescoes made by her.
The shots were made over the mural fresco processing (in 11 "days") using the optimum conditions of natural light.

This is not a tutorial but a real movie that tells the whole long process of a fresco. A film dedication to the world of the fresco, a documentary on the fresco technique in medieval setting that indirectly provides educational elements relating.

The documentary has been presented during the Salone del Restauro 2016 at Ferrara from 6th to 8th of april.

Dvd and Blu-Ray are available on sale, in italian, english and subtitled in french.    www.salonedelrestauro.com